Before getting started, it is important to know something about VisIt's infrastructure. See these links for more information:

You should first ask yourself whether a new plot is necessary. If you need to transform data but do not need a specialized method for rendering it then you might consider writing an operator instead since it is easier. If you need to both transform the data and provide a new graphical representation for that data then a new plot is probably the way to go.

A plot creates a pipeline in VisIt's compute engine. The pipeline is initially the database on which the plot will operate and any filters that the plot adds to the pipeline. The output of the plot's pipeline is a dataset that gets transmitted to VisIt's viewer. Once the dataset is sent to the viewer, the plot can apply rendering filters that change the representation of the plot's dataset, affecting how it will be drawn. The viewer also executes the portions of a plot that render it into VisIt's OpenGL visualization window.

The gui and cli plot plugins provide mechanisms for setting the plot attributes, which ultimately end up down in the compute engine's pipeline and affect how the data processing is done for the plot's dataset.

This hasn't been documented yet, but check out the page for creating an operator here ... they are similar.

All state in VisIt is transmitted between applications in the form of State objects. A state object is essentially a C++ class that contains fields that describe an object. In the case of plots, the state object contains the plot's attributes, which influence the filters that are applied to the plot and any rendering that takes place.

One way to think about plots is as a set of pipeline filters that are executed and associated with a particular method for rendering the resulting data. Not all plots require a new filter to transform the data but it depends on the type of data being processed and how it will be represented graphically. Plots can provide a new avtFilter that take in the data and transform it into a new representation. As an example, VisIt's Scatter plot takes in a mesh with data consisting of 2 or more variables and its filter uses the variables to create a new point-based mesh completely different from the original mesh. 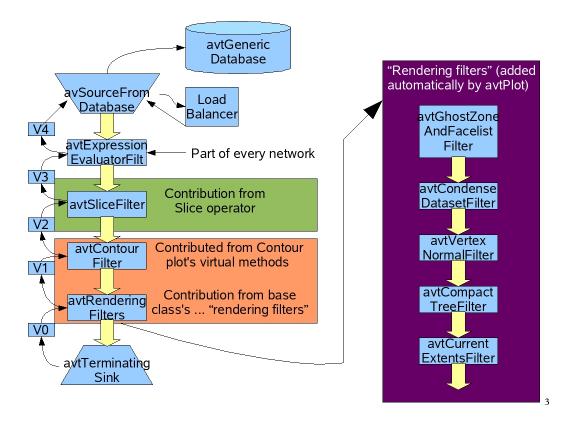 Your derived avtPlot class is a container of sorts for the filters that implements your plot's data processing and sets up the mappers that draw your plot. Your avtPlot class will:

All of VisIt's plots ultimately derive from the avtPlot class but most derive from specialized subclasses that incorporate logic to perform operations specific to the type of data that the plot represents.

Return the mapper that will draw the plot.

This method allows your plot to add filters to the portion of the pipeline that will execute on the compute engine.

This method allows your plot to add filters to the portion of the pipeline that will execute on the viewer. This is most often used for operations related to drawing the data such as glyphing.

Use this method to set plot ordering and add legends, etc.

Set properties on the mapper that is used to draw the plot. This frequently means using information in the contract to set properties that govern how the plot will be drawn.

VTK data is transformed into something viewable by a mapper. A mapper is an object that traverses the VTK data and issues commands needed to draw the data to the graphics card. Most of VisIt's plots use VisIt's vtkVisItOpenGLPolyDataMapper class to convert polydata into a sequence of OpenGL function calls that tell your computer's graphics card how to draw a VTK object. The vtkVisItOpenGLPolyDataMapper class is mainly for sets of polygonal geometry that do not change. If you want to render your plot's resulting data in a custom, or dynamic fashion then you can use a custom renderer within VisIt. VisIt's Label, Molecule, Spreadsheet, and Volume plots use custom renderers to render the VTK data in special, dynamic ways.

Hooking up a custom renderer in your avtPlot subclass

In order to add a custom renderer to your plot, you must create an instance of avtUserDefinedMapper in your avtXXXXPlot class. The mapper will bridge to your custom renderer class and ultimately make sure that your renderer's Render() method gets called with the VTK data that your plot created.

Here is the code that you need to add to your plot's destructor to make sure that the mapper and renderer are destroyed when your plot is destroyed. Note that the renderer member is a reference pointer so setting it to NULL will cause its reference count to be decremented, leading to the renderer's deletion.

Now, you must provide the code to return your user-defined mapper from your plot so it can be used when VisIt needs it. All you have to do is override the GetMapper() method and return a pointer to your plot's instance of avtUserDefinedMapper.

The new .h file can look like the code below to get started:

There are several important methods that are overridden from the avtCustomRenderer base class.

Since VisIt can operate on multi-block (domain-decomposed) data, it means that there are potentially N VTK datasets that your renderer will need to render. This means that when the resulting tree of N VTK datasets is sent from the compute engine to the viewer where the data are often rendered, there will be many VTK objects sharing your custom renderer instance. It should be noted that there is 1 custom renderer per avtPlot object and that avtPlot object will sequentially pass the N VTK datasets through the renderer by calling the Render method for each VTK dataset. So, if you plan to create display lists based for the VTK dataset, you will need to associate the display list or other resources with the particular VTK dataset being rendered. This can easily be accomplished by using a map where the map key is the address of the current VTK dataset.

This changed significantly in 2.0! The directions here apply to 2.0. Directions for 1.12 and earlier were moved to a different page.

VisIt uses OpenGL for on-screen rendering so by calling OpenGL functions in your custom renderer's Render method, your renderer will be able to draw your plot into VisIt's visualization window. VisIt also supports saving off-screen images and rendering off-screen on the compute engine (Scalable Rendering). In order to support off-screen rendering, VisIt uses Mesa versions of the mappers that typically perform rendering.

To support this, all you need to do is make sure that avtGLEWInitializer is among the first includes in the file where you implement your custom Render method:

This causes your plot to use GLEW instead of GL directly. You can further take advantage of this by using GLEW extension queries to ensure you do not use functionality which does not exist on the GPU which VisIt is running on.

VisIt can use default mappers and custom renderers to use OpenGL to draw into VisIt's visualization window. Sometimes, drawing into a visualization window is not necessarily what you want to do. Suppose you are trying to integrate some alternate data display GUI with your VisIt plot. VisIt supports alternate displays that associate some other type of display window with your VisIt plot. The alternate display can really be anything that can share the Qt event loop so it can be another Qt window, an X11 window, or perhaps even something more elaborate such as a socket to another application.

See VisIt's Spreadsheet plot for examples of how to create an alternate display.

The ViewerPluginInfo class for your plugin needs to implement AlternateDisplay methods in order for it to be able to create an alternate display. Here are the methods that should be implemented:

Note that VisIt's XML tools do not yet have a flag for alternate displays to aid in code generation. As such, you will need to add these method declarations to the XXXXViewerPluginInfo class in the generated XXXXPluginInfo.h file. It is recommended that the method definitions are kept in a separate .C file from the rest of the ViewerPluginInfo methods. You'll have to add the separate .C file into the XML file in the viewer section to ensure that the alternate display code gets compiled into the viewer plugin.

Suppose you have a Qt widget called SpecialViewer that you want to use to use for displaying data in VisIt. The implementation of the alternate display methods will look something like this:

Also note that since the avtXXXXPlot class will use a custom renderer, it is recommended that you have separate viewer and engine-specific versions of the custom renderer's Render method. This separation is necessary so as not to introduce GUI toolkit dependencies into the VisIt compute engine via the libE engine plugin. You can do this by putting the Render method into files called XXXXAlternateDisplayRenderer_Engine.C and XXXXAlternateDisplayRenderer_Viewer.C. You'll put the _Engine.C file in the engine-specific files portion of the plot's XML file. You'll put the _Viewer.C file in the viewer-specific files portion of the plot's XML file.

Viewer implementation of the Render method:

Engine implementation of the Render method:

When you run xml2plugin a basic plot window will be created for your new plot. The files will be called QvisXXXPlotWindow.C and QvisXXXPlotWindow.h and they will be compiled into the libG plugin that VisIt's gui will load on start up. The new window is typically very simple and lists state object field names in one column and widgets capable of setting the values for the fields in the next column. The types of widgets that xml2window uses are determined by the type of the fields that you selected when you created your XML file in xmledit.

It is best to start with the basic implementation of the plot window and adapt it be more aesthetically pleasing or easier to use. You can look at the implementations of the windows for other plots for guidance. It is also helpful to become familiar with programming using Qt.