In this example shows how one can use several of the PICS tools to explore a steady state flow field.

The data is from a rotating cylinder flow model used to explore chaotic advection in a steady, three-dimensional, Ekman-driven eddy model. Which is a form of a Hamiltonian system. The flow field has vertical overturning and horizontal swirling motion, and is an idealization of motion observed in some ocean eddies. When perturbed by a symmetry breaking disturbance chaos arises. Some trajectories survive the perturbation and act as barriers to chaotic transport, a result consistent with an extension of the KAM theorem for three-dimensional, volume-preserving flow. For the complete details on this data please see the paper by: Pratt, L., I. Rypina, T.M. Özgökmen, P. Wang, H. Childs and Y. Bebieva, 2014: Chaotic advection in a steady, three-dimensional, Ekman-driven eddy. Journal of Fluid Dynamics, 738, 143-183.

The image below shows the complexity of just two integral curves (streamlines) as they traverse through the steady state flow field. Finding structures such as surfaces and island chains shown in the second image is difficult at best. 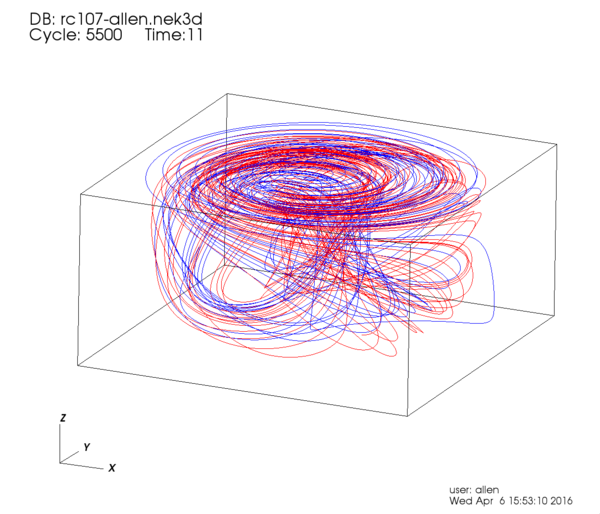 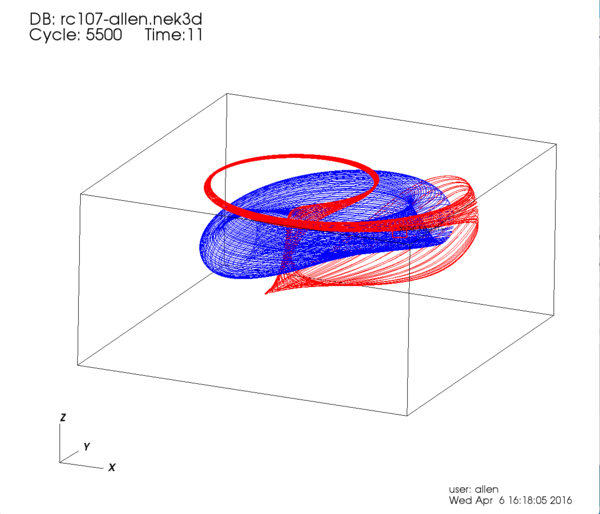 Using the LCS Operator to create a FTLE Plot

To explore the data one of the first plots one can create is an Finite Time Lyapunov Exponent (FTLE) plot. A regular grid in X-Z plane at y=0 is defined along with a 3D auxiliary grid while calculating the largest Lyapunov Exponent. The FTLE plot shows the overall gross detail of the Hamiltonian system. The zoomed image of the right side of the system shows some fine structures. However, very fine structures are hard to discern. Using a finer grid could be used but with a greater computational expense. Unlike other FTLE images due to the chaotic nature of many of the integral curves coherent structures (LCS) are not readily apparent. 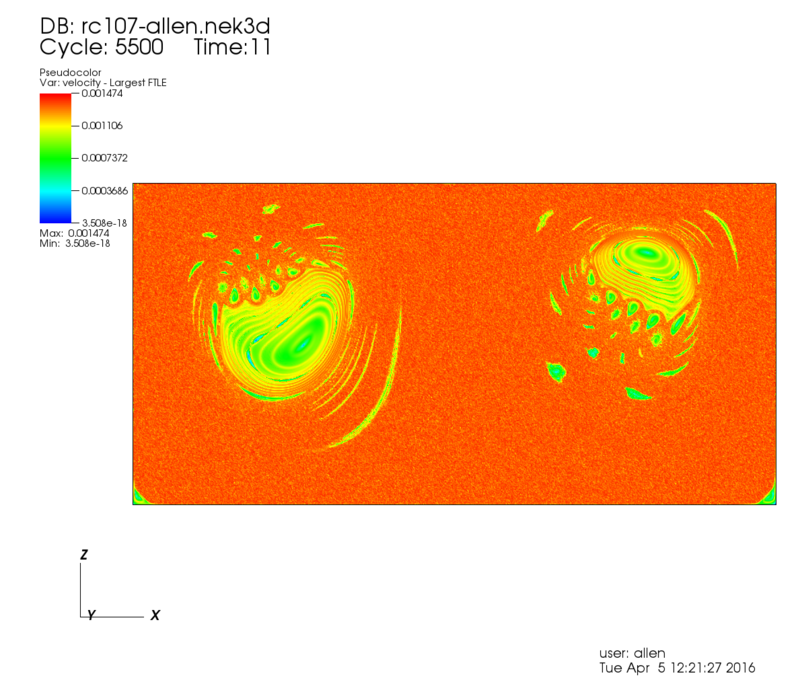 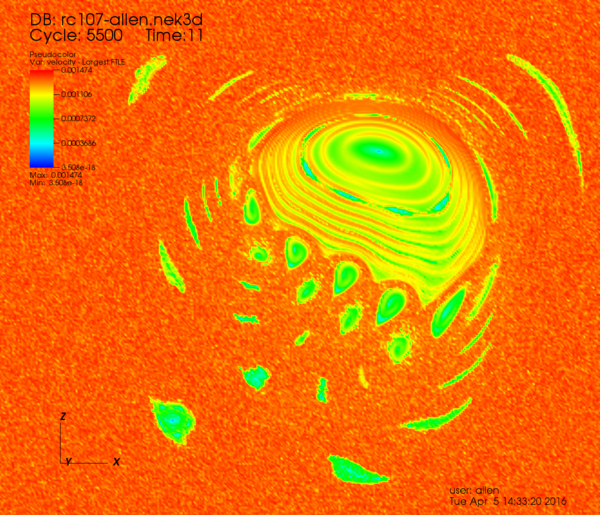 Using the Poincaré Operator to create a Puncture Plot

The simplest way to explore a doubly periodic system (i.e. data with periodicity in the toroidal and poloidal directions) is to create a puncture plot. Using the Poincaré operator one defines the puncture plane to be in the poloidal plane (i.e. X-Z plane at y=0). Next one creates a series of seed points uniformly spaced along a line in space. Although for simplicity the line is typically defined in X-Z plane at y=0. A line rather than a plane is used because for such Hamiltonian systems integral curves are volume filling. After setting the integration scheme and the number of punctures one sets the Poincaré analysis type to "None - punctures only." This will generate the puncture plot as shown below. 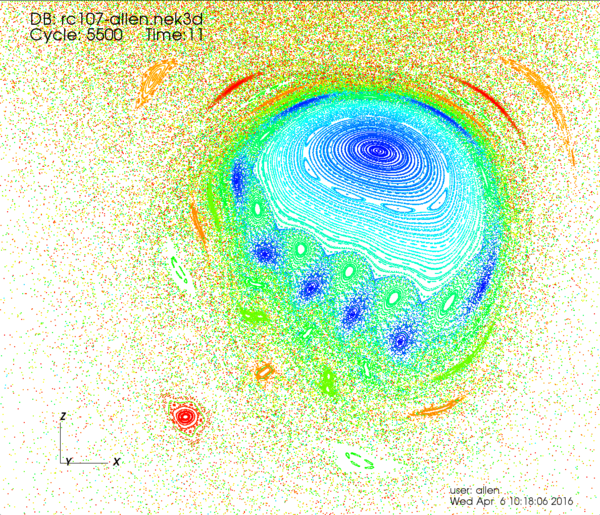 By coloring the punctures based on the integral curve id puncture plots can give good detail. For instance, the island chain in the lower left corner drawn in red also contains secondary islands. In this case there are three islands and five secondary islands. However, one does not know if the island chain has a toroidal/poloidal winding ratio of 3,1 or 3,2. Similarly the secondary islands the winding ratio could be a 15,5 or 15,10 island chain. (As will described next, in this case they are the later, 3,2 and 15,10 respectively). Further, due to the integral curve density and the volume filling nature of chaotic integral curves puncture plots often suffer from clutter. Adjusting the point density can alleviate some the clutter.

Using the Poincaré Operator to create an Enhanced Puncture Plot

A standard puncture plot does not provide any quantitative information regarding the toroidal/poloidal winding ratio or other information about the integral curve. However, the Poincaré Operator can also be used to perform a periodicity analysis that determines among other characteristics the toroidal/poloidal winding ratio, whether the trajectory lies on a rational or irrational surface or is part of an island chain or secondary island chain. Details of the analysis technique is described in the following paper: A.R. Sanderson, G. Chen, X. Tricoche, E. Cohen. “Understanding Quasi-Periodic Fieldlines and Their Topology in Toroidal Magnetic Fields,” In Topological Methods in Data Analysis and Visualization II, Edited by R. Peikert and H. Carr and H. Hauser and R. Fuchs, Springer, pp. 125--140. 2012.

To contruct this case, one leaves all of the Poincaré operator attributes the same as above except one selects the Analysis type to be "Full" and the Data value to be "Safety Factor Q," defined to be as the ratio of the toroidal/poloidal winding values. This operation creates the following enhanced Puncture plot shown on the left. In this case one can see the change in the safety factor which monotonically increases outward from the central axis. There are some exceptions, namely those drawn in blue where there is secondary rotation around nonaxisymmetric islands. In theses cases the ratio of the secondary axis is reported. For instance, within the puncture plot there is 5,4 island chain with 12 points defining each island, island chain D below. However, it has a secondary poloidal rotation with a toroidal/poloidal winding ratio of 12,17. 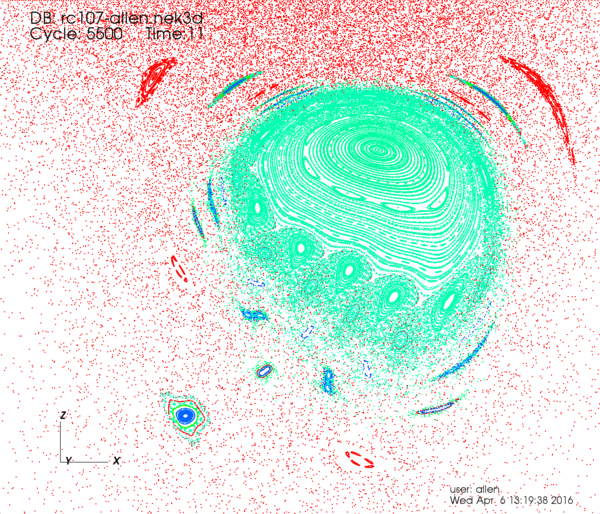 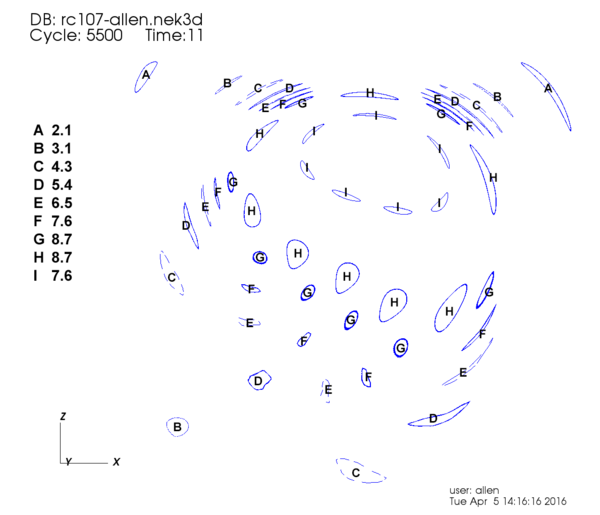 Using the LCS and Poincaré Operator

One can then use the information from the Poincaré analysis to label the FTLE image. Many of the very fine island chain structure is not readily apparent in the top of the FTLE image. 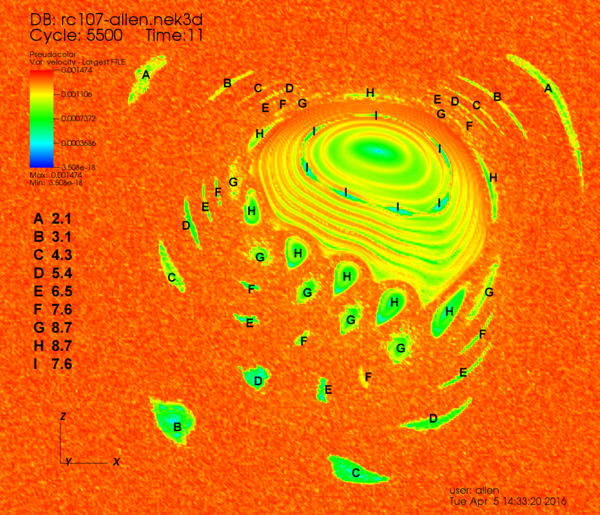 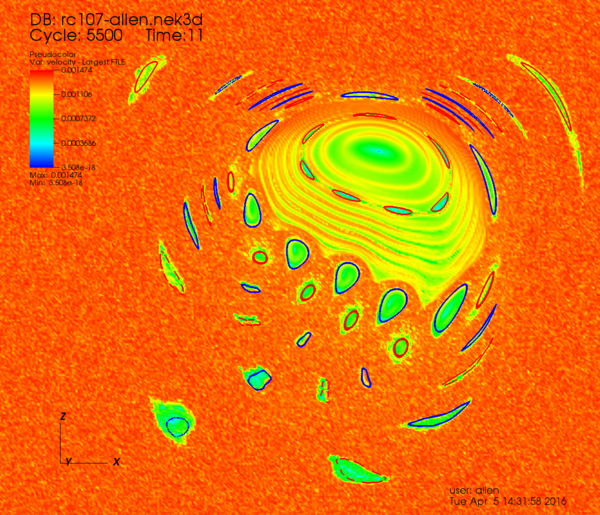 The Poincaré operator can also be used to reconstruct the surfaces found by the analysis. In green-blue is the 2,1 island chain label as "A" above as well as an irrational surface near the island chain "I". Such reconstructions are useful for presentations to show the twisting complexity of the surfaces. 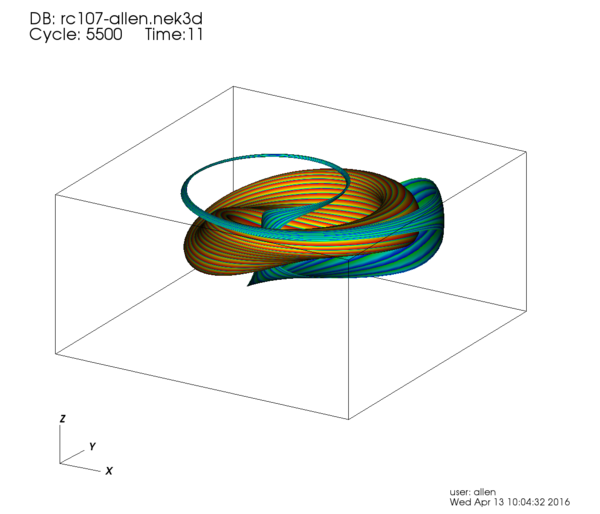 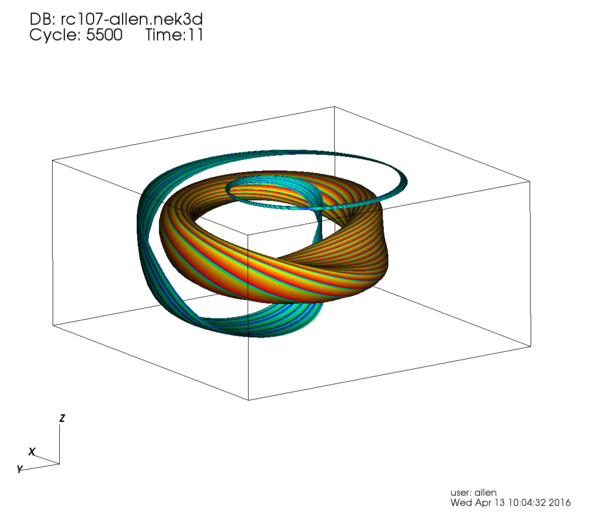