Queries are the mechanism to do data analysis, to pull out a number or curve that describes the data set. 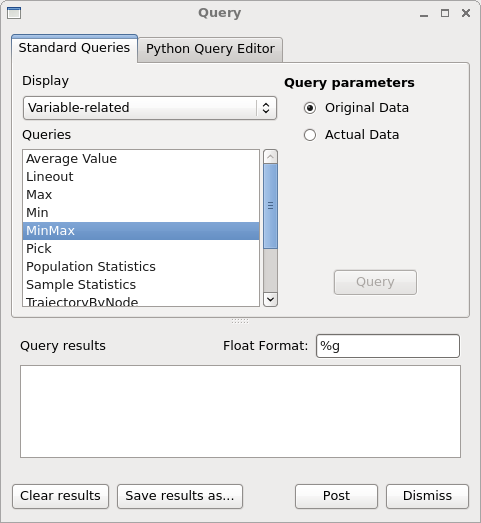 What are queries over Time

Queries over time perform analysis through time and generate a time-curve.

Experiment with queries over time 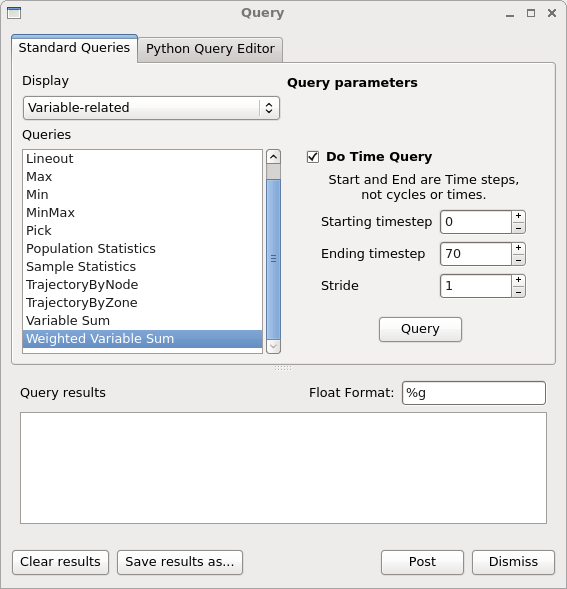 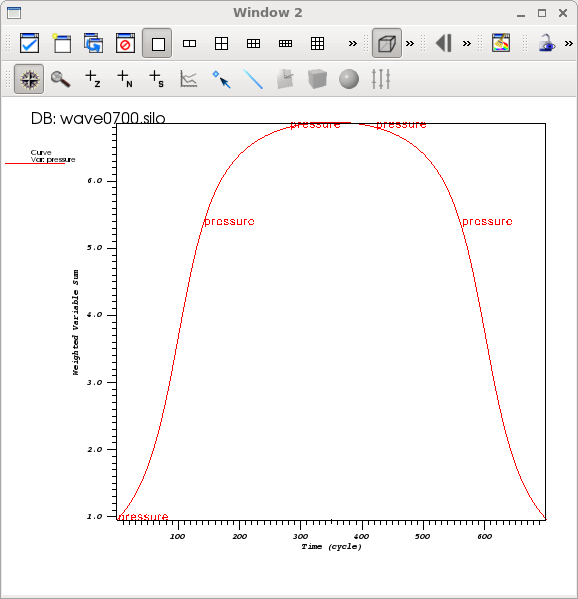 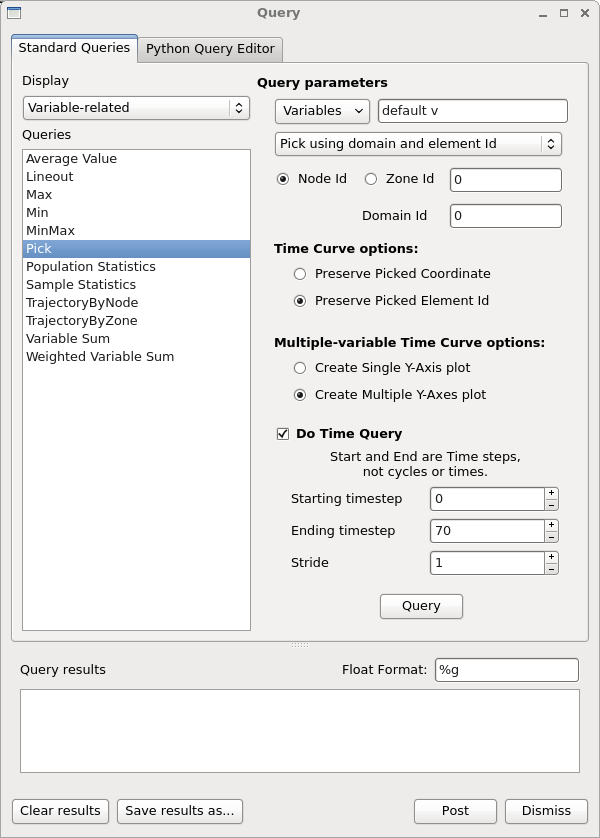 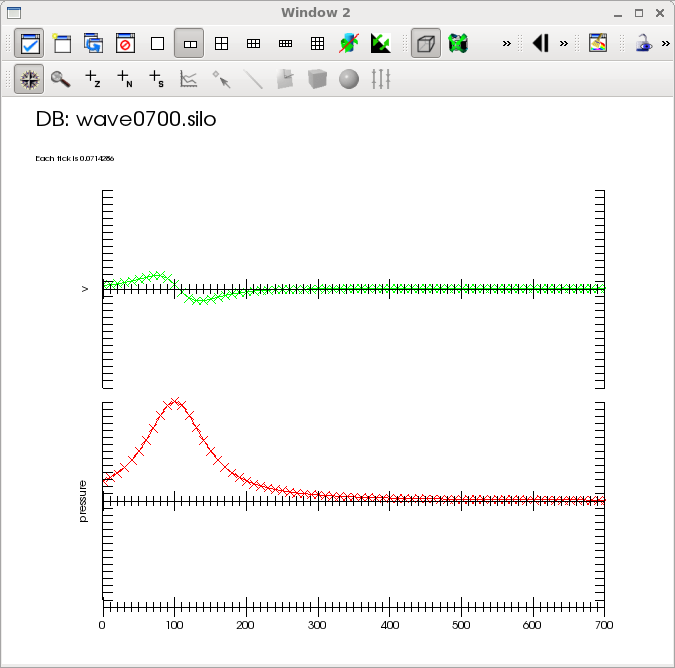 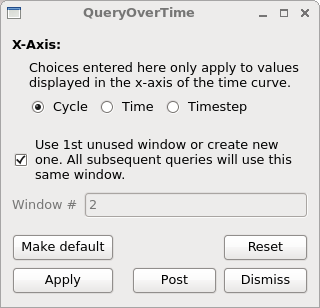 Expressions in VisIt create new mesh variables from existing ones. These are also known as derived quantities. VisIt's expression system supports only derived quantities that create a new mesh variable defined over the entire mesh. Given a mesh on which a variable named pressure is defined, an example of a very simple expression is 2*pressure. On the other hand, suppose one wanted to sum (or integrate) pressure over the entire mesh (maybe the mesh represents some surface area over which a force calculation is desired). Such an operation is not an expression in VisIt because it does not result in a new variable defined over the entire mesh. In this example, summing pressure over the entire mesh results in a single, scalar, number, like 25.6.. Such an operation is supported instead by VisIt's Variable Sum Query. This tends to be true in general; Expressions define whole mesh variables while Queries define single numerical values (there are, however, some Queries for which this is not strictly true). 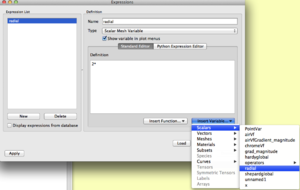 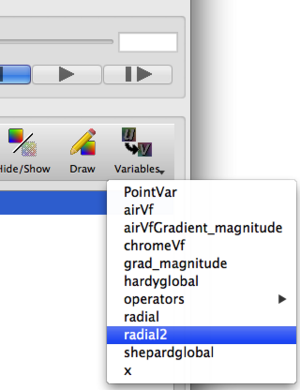 Accessing coordinates (of a mesh) in Expressions

Here, we'll use the category of Mesh expressions to access the coordinates of a mesh, again, working with noise2d.silo 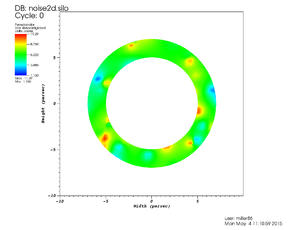 You should get the picture at right. In this picture, we are displaying a Pseudocolor plot of shepardglobal, but Isovolumed by our Dist expression in the range [5...7]

This example also demonstrates the use of an expression function, coord() to operate on a mesh and return its coordinates as a vector variable on the mesh.

VisIt has a variety of expression functions that operate on a Mesh including area (for 2D meshes), volume (for 3D meshes, revolved_volume (for 2D cylindrically symmetric meshes), zonetype, and more. In addition, VisIt includes the entire suite of Mesh Quality Expressions from the Verdict Library

If the database contains scalar variables representing the individual components of a vector or tensor, VisIt's Expression system allows you to construct the associated vector (or tensor). You create vectors in VisIt's Expression system using the curly bracket vector compose {} operator. For example, using noise2d.silo again as an example, suppose we want to compose a Vector valued expression that has shepardglobal and hardyglobal as components. Here are the steps... 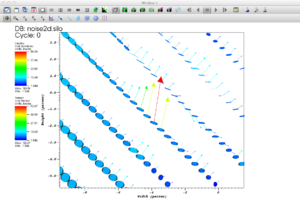 VisIt will allow you to define expressions that it winds up determining to be invalid later when it attempts to execute those expressions. Some common issues are the mixing of incompatible mesh variables in the same expression without the necessary additional functions to make them compatible.

For example, what happens if you mix scalar and vector mesh variables (e.g. variables of different Tensor Rank) in the same expression? Again, using noise2d.silo

As an aside, as you go back and forth between the Expressions window creating and/or adjusting expression definitions, VisIt makes no attempt to keep track of all the changes you've made in expressions and automatically update plots as expressions change. You will have to manually clear or delete plots to force VisIt to re-draw plots in which you've changed expressions.

In noise2d.silo, some variables are zone centered and some are node centered. What happens if you combine these in an expression? VisIt will default to zone centering for the result. If this is not the desired result, use the recenter() expression function, where appropriate, to adjust centering of some of the terms in your expression. For example, again using noise2d.silo.

Finally, note that these two expressions...

both achieve a node-centered result. But, each expression is subtly (and numerically) different. The first recenter's airVf to the nodes and then performs the summation operator at each node. In the second, there is an implied recentering of shepardglobal to the zones first. Then, the summation operator is applied at each zone center and finally the results are recentered back to the nodes. In all likelihood this results in a numerically lower quality result. The moral is that in a complex series of expressions be sure to take care where you want recentering to occur.

In many cases, especially in Silo databases, all the available variables in a database are not always defined on the same mesh. This can complicate matters involving expressions in variables from different meshes.

Just as in the previous two examples of incompatible variables where the solution was to apply some functions to make the variables compatible, we have to do the same thing when variables from different meshes are combined in an expression. The key expression functions which enable this are called Cross Mesh Field Evaluation or CMFE functions. We will only briefly touch on these here. CMFEs will be discussed in much greater detail in a tutorial devoted to that topic.

So, whats happening here? VisIt is deciding to perform the summation operation on the PointVar's mesh. That mesh consists of 100 points. So, when it encounters the shepardglobal variable (defined on Mesh with 50x50 nodes), it simply ignores any values in shepardgloabl after the first 100. Most likely, this is not the desired outcome.

We have two options each of which involves mapping one of the variables onto the other variable's mesh using one of the CMFE expression functions. We can map shepardglobal onto PointMesh or we can map PointVar onto Mesh. We'll do both here 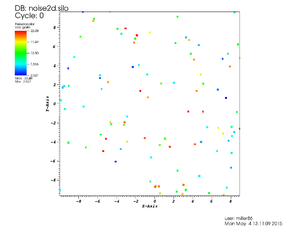 Combining Expressions and Queries Is Powerful

Suppose you have a database generated by some application code simulating some object being blown apart. Maybe its a 2D, cylindrically symmetric calculation. Next, suppose the code produced a density and velocity variable. However, what you want to compute is the total mass of some (portion of) of the object that has velocity (magnitude) greater than some threshold, say 5 meters/second. You can use a combination of Expressions, Queries and the Threshold operator to achieve this.

Mass is density * volume. You have a 2D mesh, so how do you get volume from something that has only 2 dimensions? You know the mesh represents a calculation that is cylindrically symmetric (revolved around the y-axis). You can use the revolved_volume() Expression function to obtain the volume of each zone in the mesh. Then, you can multiply the result of revolved_volume() by density to get mass of each zone in the mesh. Once you have that, you can use threshold operator to display only those zones with velocity (magnitude) greater than 5 and then a variable sum query to add up all the mass moving at that velocity.

Here, we demonstrate the steps involved using the noise2d.silo database. Because that database does not quite match the problem assumption described in the preceding paragraphs, we simply re-purpose a few of the variables in the database to serve as our density and velocity variables in this example. Namely, we define the expression density as an alias for shephardglobal and velocity as an alias for grad. 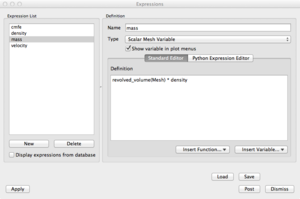 Here are the steps involved... 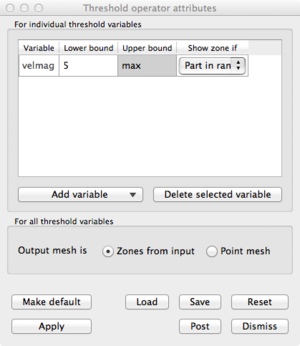 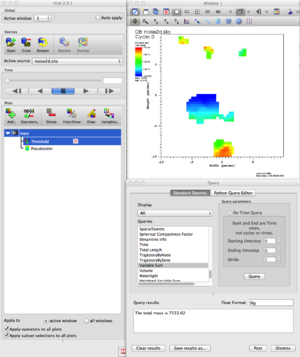 If you save settings, any expressions you have defined are also saved with the settings. And, they will appear (and sometimes pollute) your menus whether or not they are valid expressions for the currently active database.