Using CMake with VisIt on Windows

Run cmake-gui.exe, which will display this window: 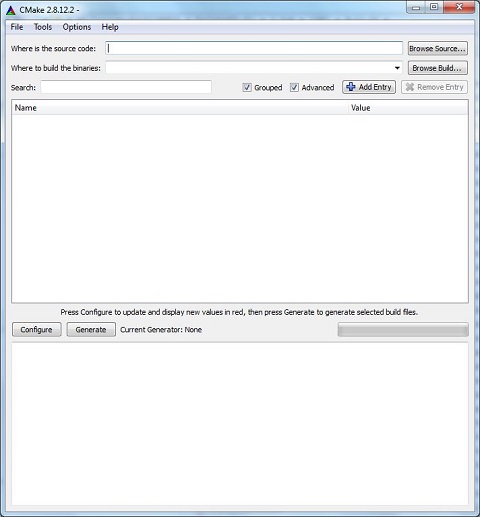 Fill in the location of VisIt's src directory in the 'Where is the source code:' section. 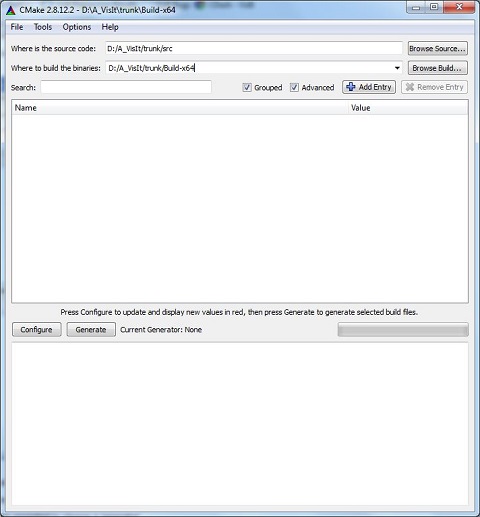 By default, most of the supported database reader plugins are built, which can slow down loading of the solution in the Visual Studio IDE, and slow down the build. If you want to reduce the number of plugins built, add a CMake var using the Add Entry Button. If you are producing a version of VisIt that you plan to distribute, you should skip this step so all database reader plugins are built. 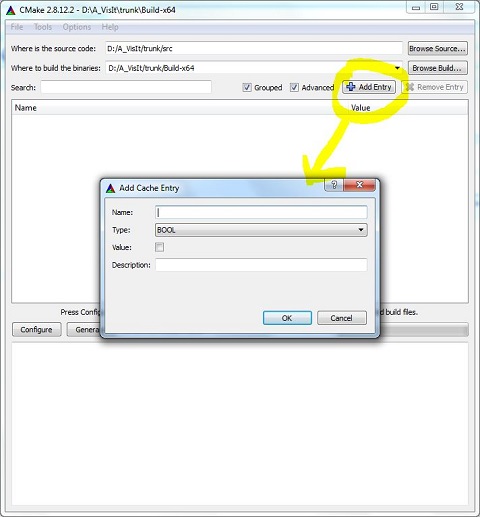 To limit the database plugins to a specific set of plugins, set the Name of the variable to VISIT_SELECTED_DATABASE_PLUGINS. The Type should be STRING. The value is a ';' separated list of database plugins names (case should match the name of the folder in /src/databases. 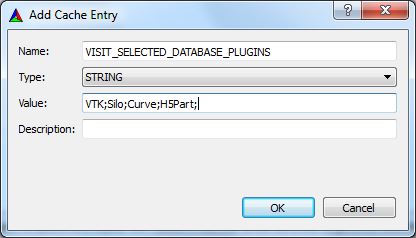 In the main CMake Window, click the 'Configure' button.

If the build directory does not exist, you will be prompted to allow its creation.

You will also be prompted to choose a 'generator'. On Windows, this corresponds to the version of Visual Studio for which you plan to generate a solution and projects.

Currently, only Visual Studio versions 2012 (version 11) and 2010 (version 10) are supported by pre-built Third-party libs in VisIt's windowsbuild directory. 32-bit and 64-bit are supported for both versions. 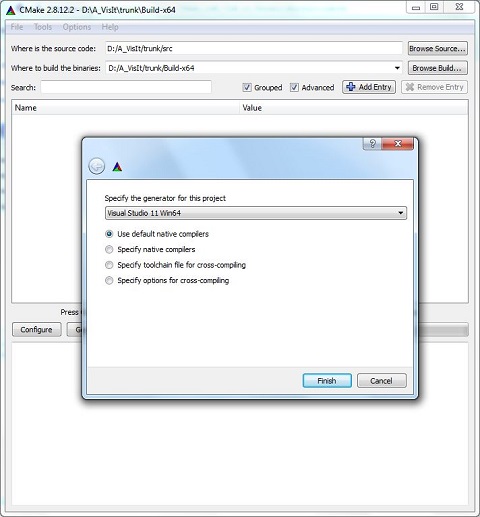 CMakeCache entries will be displayed after the initial configure. All entries at this point will be highlighted reddish orange -- a signal that you may want to modify some of them. Subsequent clicks of the 'Configure' button highlight only entries that contain errors or entries that are new since the last configure.

You can modify how many entries are seen, and how they are viewed by selecting the: Grouped, and/or Advanced buttons. Grouped groups similarly named items, Advanced shows all the entries. Using both is probably the easiest to navigate for use with VisIt. Mouse-hover over individual entries (not groups) will generate a brief description.

Most of the default settings should be fine, though you may want to change CMAKE_INSTALL_PREFIX from its default location within the Build directory. 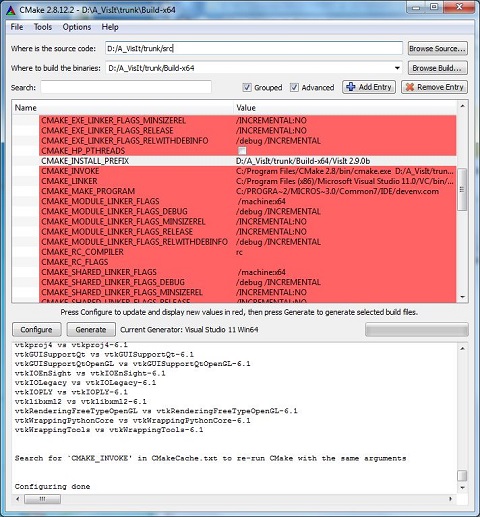 Assuming that you have installed the prerequisites for building parallel VisIt on Windows, you should choose to create a parallel build.

The solution file that cmake creates has a project called ZERO_CHECK that is occasionally invoked to regenerate the projects. This is highly undesirable since it tends to happen during a build and can cause many projects to be reloaded into the IDE, wasting time unnecessarily. To avoid this behavior, you can create a new CMake cache entry:

Make any changes, and click the 'Configure' button again (You must always 'Configure' after making changes to entries). Once you are satisfied with the choices and no entries are highlighted (in error), click the 'Generate' button to tell CMake to generate the solution and project files.

Configuring from the command line

The CMake configuring process can be run from the command line, similar to *nix systems. This can be used to create automatic builds of VisIt. Run cmake.exe without any arguments to get a list of options, and to see how generators are specified.

For VS 2012 64-bit, assuming you are in your Build directory, which is peer to VisIt's src directory, you would run:

You can then hand-edit the CMakeCache.txt file, rerun cmake.

Solution and project files are regenerated with each call to cmake.exe.

The main solution file is named VISIT, and will be in the root Build directory. Open the solution, choose your configuration, and build the ALL_BUILD project. If you build from the Visual Studio IDE, sometimes various projects will fail due to an apparent glitch in the parallel build. If that happens, simply run the build again and any out of date projects will be built.

You may also build from the command line:

After the build completes, the generated VisIt binaries will be placed under the <build_dir>/exe directory for the most part.

(<config_type> will correspond to configuration you chose during build, e.g. Debug or Release)

Running VisIt from the build directory

Once the build completes, you can run VisIt by

NOTE: If you have previously built a development version of VisIt and had set VISITDEVDIR in your environement, delete this before attempting to run visit.exe.

Creating a package for installing VisIt on other windows systems

Build the _PACKAGE target from within Visual Studio. You may also generate the installer from the command line using the following command:

An installer executable named visit<version>.exe will be created in the INSTALL directory chosen with CMake.